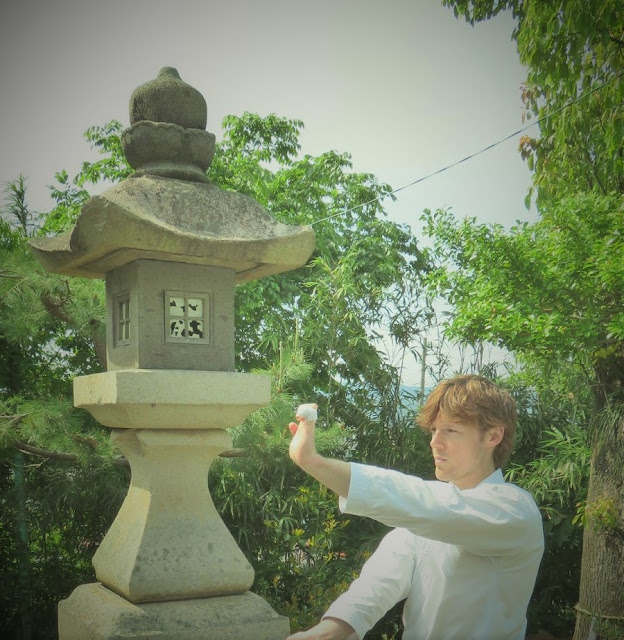 ぺッチュ-リン (Pechurin) or ス-パ-リンペイ (Suparinpei) is known as 百八歩 (Hyakuhappo, in Shotokan-Ryu. This means ‘108 steps’, which has direct roots to Buddhism; likewise, Gojushiho with 54 steps and, indeed, Joko. I am zero-percent Buddhist, however, it must be clarified that these names reflect ‘phases’ in that particular religion, which makes sense, as our art originated from India and China.

Hyakuhappo is also referred to, by the younger generation of instructors (meaning, under roughly 80 years old) as ‘Hyakuhachiho’ which is a more contemporary reading of the same kanji. Asai Sensei said to me that “...the older generation (Shotokan practitioners) only used ‘Hyakuhappo’.” But to illustrate that names are not so important, Osaka Yoshiharu Sensei simply calls this kata as ‘Hyakuhachi’. I will return to Osaka Sensei later.

While still relatively obscure, this was a kata ‘in mainstream JKA Shotokan’ in the past and, as you will well know, was mentioned by Nakayama Masatoshi Sensei in his ‘Best Karate’ series (along with other kata, not later included in volumes five to 11). Most notably, and certainly worth mentioning here, is that Wankan and Jiin were also missing (as they are widely practiced); nevertheless, I have explained about this in detail in the past.

So, it is said that Hyakuhappo entered Shotokan at the same time as Unsu, Sochin, Nijushiho and Gojushiho (Sho)—Gojushiho Dai was an adaptation formed at ‘The Shotokan’. Nevertheless, the story changes from instructor to instructor. Rather than go on about kata history (respect to them, but I’ll leave that for the karate historians), I prefer to JUST TRAIN. That is, use the kata as a training tool to develop my skill as a karateka, and improve my students as much as possible.

Let me give a generic explanation about Hyakuhappo from my senpai (seniors) here in Japan:

“It is said that Chogi, the second son of Lord Yoshimura, financed Higaonna Kanryo’s training trip to Fukien, China. Higaonna Sensei was his teacher. It was during this time that Pechurin was acquired; furthermore, and allegedly, it was based on the original Chinese form of Sanchin. It is believed that in older times Pechurin/Hyakuhappo was made up of three interconnected and individual kata: Jyo, Chu and Ge. The kata widely practiced now is only the Jyo version”.

Now, I should mention that rendition that I practice and teach is slightly different from the mainstream JKA-style Shotokan one. There are five stance differences and the second to final waza (movement 79), while still using yori-ashi, moves in a different direction; moreover, is a completely different waza/application.

The Hyakuhappo I do is Asai-Ryu, but probably not original: based on what learned from Osaka Sensei.

The version taught by the late Yamaguchi Toru Sensei is said to be the original - he learned this from Shoji Hiroshi Sensei; nevertheless, I prefer the Asai-ha rendition in both training and practical applications. This version is probably unique to IKS, especially in regards to the aforementioned use of Fudo-dachi.

I would like to end by saying that Osaka Yoshiharu Sensei strongly advocates that both Jiin and ‘Hyakuhachi’ should be retained within the standard Shotokan kata. So much, that he produced and widely distributed a manuscript (across Japan) featuring them both. I think it is fair to say that 'this says a lot'. Based on Asai Sensei's teachings and Osaka Sensei's reinforcement of these, IKS has officially 're-included' Hyakuhappo into our list of 'standard Shotokan-Ryu Kata'. Needless to say, Jiin has never been omitted from what I practice and teach. I will leave it there for today and wish everyone the best in their training, good health and happiness.