IMPACT IN TRAINING: An opportunity to clarify the truth 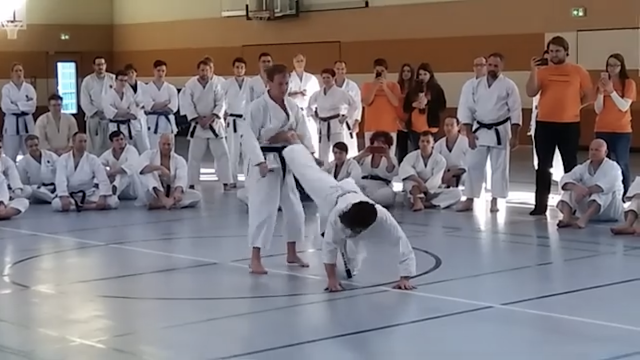 Some have questioned “Why do you virtually use the entire surface of the foot (foot side on) when you do ushiro-geri with training partner? They have even told me that my ushiro-geri is wrong. I don't mind, as the keyboard warriors are such karate-gods. However, I thought I'd use such trolling comments to highlight how Asai Tetsuhiko Sensei taught me to impact safely: for 'giving and receiving'.

Furthermore, it is the same reason I strike down the dogi, across the dogi, etcetera, with the various strikes on strong parts of the anatomy…

The reason is simple: So I don’t hurt my training partners and assistants whilst being able to put a little but controlled power into the waza.

Of course, when I’m hitting the sandbag, impact shields etc..., I hit with proper weapons of the body and targets, like I would (and have) outside the dojo. In other words, to inflict as much damage as possible with the respect waza. Let's examine how I train on OBJECTS in the dojo, with the aforementioned techniques...

Ushiro-geri I impact with kakato (the heel), which the heel is diagonally at the top of my foot formation.

Mawashi-geri with josokutei (the ball of the foot) or sune (the shin), both of which I heavily axe downwards.

In the case of the strikes - real fighting - they are instead directed to weak points, for example, instead of shuto kesa-uchi snapping down the dogi (as said above: for safety practice) it directly impacts on say the clavicle, temple, or carotid artery. Some people have accused Asai Sensei, and me also, of just 'slapping'. Anyone who has trained with Asai Sensei, or myself, knows that these waza are not mere slaps. The aforementioned points explain this, but not fully. They train the 'follow through' of waza which is imperative to maximize effectiveness.

Another example is striking the upper inside thigh as opposed to impacting the testicles. Taken as a whole, I hope that all these points are self explanatory.

Impacting not to injure each others in training, is obviously very good and ethical practice (for each other) as we can AMP UP the speed and power without injuring each other. In this way we can give (execute) techniques more vigorously in the mechanical sense; furthermore, and more importantly, receive (feel/experience) more explosive waza. Of course, all of this depends on our respective training partners, kumite 'opponents' and demonstration volunteers. No one should be forced into any training experiences, which are detrimental to them. However, those who want to experience more intensity must equally be given the opportunity.

Lastly, to the haters and trolls. This post will not help your jealousy. My advice to you is this. Instead of being keyboard warriors and trying to promote yourselves through successful karateka, instead seek real training and push yourself to higher levels outside of your micro-kingdoms. I am personally so happy to see (and help) people get better at karate all over the world. As an instructor of karate, and in my mid 40s, my aim is always to build karateka much stronger and technically better than myself. To summarize, the aforementioned methodology in this article is very important in this process. Accordingly, the critical attack of my ushiro-geri has provided a wonderful opportunity for me to clarify these points. How ironic is that? OSU!