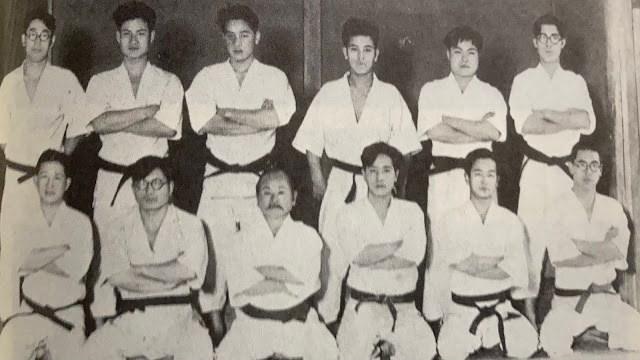 Based on a question I received I’d like to address what is ‘Natural Movement’ in karate; in particular, the positioning it requires and most importantly “how these ‘positioning's’ dictate whether or not one can move naturally”.

This aspect is why the top Japanese karateka ‘look different’ when they move: irrespective of their varying physique’s; furthermore, why such slightly built young Japanese girls and women produce so much explosiveness and precision in their kata and kumite.

This sounds contrary to Japanese ‘dantai’ culture; however, when one considers the unparalleled number of top-class instructors here in Japan, it is obvious that this is reflected in the coaching—even though it is ‘banking model of education’.

My top priority as an instructor is to ensure trainees reach their pinnacle skill levels. If they don’t, I lose them. Actually, I really like this pressure as it pushes me forward.

Natural karate is actually VERY EASY. Ironically though, it is not easy as people tend to complicate things for themselves: in their minds and, indeed resultingly, in their movement. Actually, outside Japan, I think many instructors simply want to have control over their respective students because they are fearful. Accordingly, they want to give their students fish as opposed to teach them how to fish. This has been a major issue greatly restricting karate growth around the world since its initial global spread. It literally illustrates the saying: ‘Big fish in a small pond’.

That aside and to wrap up, I will present some points why natural karate is best (FOR EVERYONE):

Firstly, and most obviously one does not have to fight against themselves; that is, fight against their own physiques to reach optimal skill levels. Secondly, effective application is readily achieved as the body is not contorted—many karateka are what I can only describe as being ‘caught in technique’. Thirdly, karate training ‘in this way’ reduces causing damage to the body (and those injured or with poor health can continue training if they follow this methodology). Fourthly, technique is balanced and alignment correct; therefore, inherently beautiful in the budo/bujutsu sense (note: not necessarily in the empty sports ‘plastic’ sense). Fifthly, more explosiveness is achieved as the whole body can be utilized via the proper and harmonious use of kinetic chains. Sixthly, the mind is freed as “…the natural state of the body inherently allows one ‘to be psychologically in the moment’ and optimally reflexive”.