With 26 movements—with the kiai applied on the decisive points of techniques 11 and 26–there are 12 different waza featured in 平安二段 (Heian Nidan). It is the first kata in classical Shotokan-Ryu to feature keriwaza, both yoko-keage and mae-geri. Standout features include six waza which use both hands/arms simultaneously and the use of rear arm defenses rotating into gyaku-hanmi (Zenkutsu). Half the kata, 13 movements, utilize kokutsu-dachi, within which transitions (between hanmi and shomen) must not interfere with stance form; in particular, the sasae-ashi. Furthermore, the correct use and trajectories of the moving leg, and placement of the feet and toes, should be progressively refined. Like the other four Heian kata a lightness in the muscles should be consciously maintained with “…snap being achieved via shime of the joints (as opposed to forced muscle tension) and both swift and precise actions”.

Here are the 12 different waza featured in Heian Nidan:

Some notes on Heian Nidan:

Master Itosu Anko allegedly formulated the five Pinan kata in the very early 20 century, largely based on Kushanku (Kanku Dai). Funakoshi Gichin Sensei relabeled them ‘Heian’ and reversed the order of Shodan and Nidan. It is said that he did this due to Pinan Nidan being ‘more technically difficult’ than Shodan. However, 'more than its movements', “..the applications are of a higher level and more diverse”. In this regard, consider the 12 different waza in Heian Nidan in comparison to the five in Heian Shodan.

Another factor in this regards is that, while strung together and applied as renzokuwaza, Heian Shodan largely consists of single waza with fumidashi; whereas Nidan features four distinct and flowing combinations. In particular, the use of Gyaku-Hanmi with the rear arm uchi-uke stands out; moreover, this is a prototype for Kanku Dai, Kanku Sho, and so forth. Indeed within this waza is the ‘basic’ of 'legs followed by hands'. This blueprint is very important in karate and self-defense as a whole.

As mentioned in the opening, yoko-keage also deserves attention. Besides being the first kick in all of the Shotokan kata it classically peered with a simultaneous uraken yokomawashi uchi (and followed by shuto-uke 180 degrees in the opposite direction). In particular, the hikite (ryoken hidari koshi) must be correct and the timing of uraken delayed—so that it can be perfectly timed with the larger action of the keage. I won't mention the okuribashi here too much, leading into the keage, except to say it "...draws a figurative line in the sand in regards to the applying the central axis and optimal spring (for keriwara) via momentum and positioning".

I certainly cannot miss discussing movements ‘one to three’ (and, indeed, ‘four to six’ on the opposite side). They have much significance for me, as when I was a child—and first saw, and tried this kata—I thought “I’ll never be able to do this!” These sequences are therefore deeply etched into my personal memory: very early on in my karate life.

Technique-wise, this three movement combination (primarily) relies on:  (a) trajectory, (b) snap, (c) kime, (d) ‘rebound action’, (e) koshi no kaiten, and (e) shime (the strict use of the hikite and its corresponding elbow). Note that “…movements two and five are sideways whipping strikes with kentsui”—not ura zuki; likewise, “…movements three and six are direct/straight sokumen zuki”—not kentsui uchimawashi uchi.

Movement 11, which the first kiai is applied upon, involves a simultaneous osae-uke and nukite. This waza has several effective applications but the overarching concept is the removal of time between defense and counter, or two simultaneous attacks. This is also expressed in movement 22: migi chudan morote-uke.

Please note the introduction of hidari and migi ashi ‘zenkutsu’ in this kata. This stance (actually 'variation'), is a shorter and narrower version of zenkutsu-dachi. The inside of the front foot is roughly in line with the inside of the rear foot. The length can range from “…just slightly less than a regular zenkutsu-dachi to as narrow as a ‘hips width’.” To not confuse readers I’ve used the term ‘zenkutsu’ in this article (which has been the orthodox/mainstream term since the 1980s when I began my karate journey); however, I personally label it as ‘Shokutsu-dachi’ following Asai Sensei’s teaching, which is apparently the original term.

Lastly, I’d like to highlight movements 24 and 26, which are in zenkutsu (shokutsu-dachi). These are advancing attacks driving forward with jodan age-uke: the second of which has the final kiai. Use propulsion; the moving of the center; and sharp hip action to produce decisive blows. Of course I could go on with other notable points, but I’ll leave it there. Now, let me move on to the complete overview with the command count…押忍!! - André. 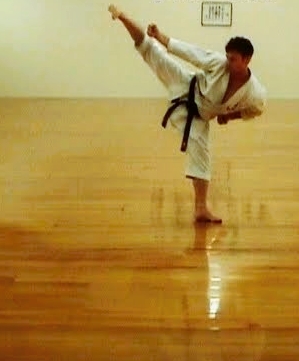 Movement Seven of Heian Nidan performed in the way Asai Sensei taught it: healthy for the knees and hips with more impact power.