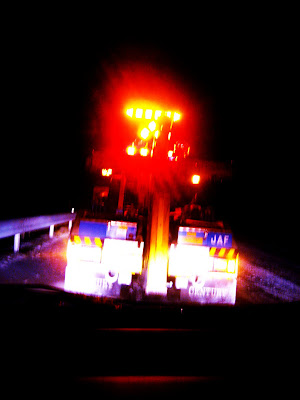 On the way to Aya’s and Daisuke’s wedding (Aya is a student), we managed to get our car stuck in the snow, isolated in the Ajimu mountains. After around three and a half hours wait, we were finally ‘rescued’ by Goto San, who I nicknamed ‘Frosty the Snowman’ from the JAF (Japan Auto Federation)… Goto San was not only our savior but was also a real comedian, hence I christened him ‘Frosty’.
_________
Whilst being towed along, we passed dozens of stranded vehicles (with drivers jealously staring at us), and we even saw a bus wildly slide, and crash into a taxi! Frosty thought it was hilarious, whilst emphasizing how Japanese cab and bus drivers think “they own the road”. What a universal concept hahaha… Anyway with the howling wind and carpets of snow travelling horizontally past our windshield, we were happy to finally continue the rest of our journey, on dry surfaces, further down the mountain. Thanks to ‘Mr. Goto’ AKA ‘Frosty The Snowman’. What a Christmas story folks.
_______
Fortunately, after ‘half a night’s sleep’, we made it on time to Aya and Daisuke’s “huge wedding” in Beppu. Hundreds of guests, and all the goodies! It was definitely worth getting stuck in the snow to make it. Congratulations 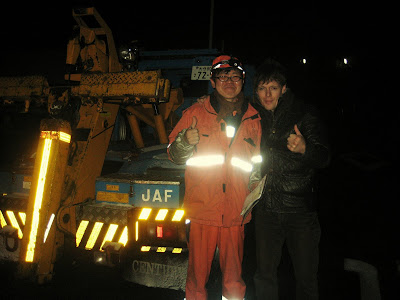