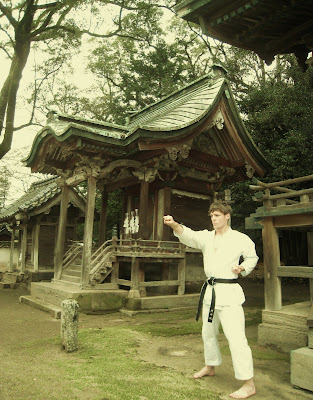 Why is it that karate exponents, traditional karateka in particular, do not enter and win full-contact events, such as boxing, mixed martial arts, muay thai kickboxing etc? Well, firstly they would never win such competitions without completely changing their style into a fighting art (or cross training in one). What I mean by a fighting art is a martial art which is for “dueling with an opponent and winning”. Traditional karate is technically not a martial art which produces fighters, but rather a ‘hit and escape self-defense system’. I want to emphasize this strongly here, “TRADITIONAL KARATE INDEPENDENTLY DOES NOT PRODUCE FIGHTERS”.
__________

The nature of all techniques in traditional Japanese karate are to take out the opponent as quickly as possible, ideally with a single finishing blow or ichigeki-hissho. This is the best way in a self-defense situation, but is hardly the case in an organized fight or duel. Keep in mind that a fighter is someone who is training to win a fight. For example think of an amateur or professional boxer. Everything they do in their training is to win their upcoming bout or string of bouts. Compare this to a karateka practicing kihon, kata and kumite in a dojo, none of which directly/perfectly translates to a boxing ring or MMA cage. What is the karateka going to do in a boxing ring? How about in a MMA bout? Are they going to charge in with a combination of kizami zuki and gyaku zuki? How about demonstrate a kata for their opponent then ask if they want to see the "practical" applications? 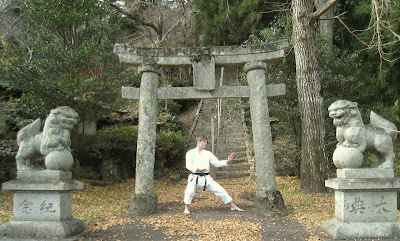 _________
I’m proud not to be a fighter, and never wish to be one. However, I constantly hone my techniques to stop an attacker with a single devastating blow. To me, this is the physical meaning of “Karate-do ni sente nashi (There is no first attack in karate-do)”. Understanding and practicing karate in this way will send you in the right direction insofar as self-defense is concerned. If your desire is to become a ‘fighter’ you’d be much better doing another martial art, or at least cross training in one (or several)! But remember it won’t stop there! If you want to be a fighter, just training is not enough! You’ll have to get in fights, because needless to say, that’s what a fighter does, they fight. Either in organized competitions, on the street or both. Like I said before, I’m proud not to be a fighter!
__________ 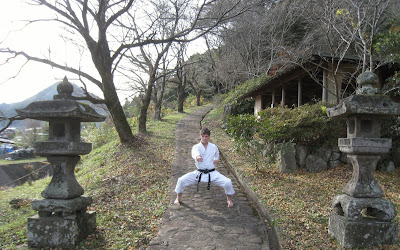 Karate, WHEN TRAINED CORRECTLY, is the 'best chance' martial art to deal with physically stronger opponents, multiple attackers, and armed assailants, such as those carrying a knife. Why? Because of its focus on “getting in and out as fast as possible”. Destructively impacting with a sharp weapon of the body, to a vital point, is what defines authentic traditional karate, as opposed to ‘slugging it’ out, or ‘grappling on the ground’.
__________

My advice is to always keep in mind what your targets are in training, and follow the path, which allows you to achieve these targets. Understand that traditional karatedo by itself will never turn you into a fighter, but also question "do you really want to be one?" To conclude I'd like to say that you will never see a traditional karateka win K1, a MMA match, or a boxing fight purely using karate-techniques. However, if they've trained correctly, constantly seeking ichigeki-hissho in their daily practice, they will more than equipped to handle themselves in any self-defense situation.
_________