﻿Yoko geri keage (Side snap kick/Side rising kick) is found in seven of the 25 `standard’ Shotokan kata (Heian Nidan, Heian Yondan, Kanku Dai, Gankaku, Bassai Sho, Kanku Sho and Sochin) and appears 16 times total. Yet many people claim that the kick is ineffective… Excuse the pun, but this `raises’ some common-sense questions, such as: “Why is yoko keage in so many kata?” and, in particular, “Why practice it so much if it is indeed an ineffective waza/technique, or has no developmental purpose martial-arts-wise?” In addition to the kata, and stating the obvious, yoko keage is also found throughout the JKA (Japan Karate Association) grading syllabus (required for the training/examinations for 8th Kyu from heisoku-dachi; 7th Kyu to Shodan—cross stepping and landing in kiba dachi; and finally, for the Nidan Exam, switching legs in combination with yoko-kekomi. Interestingly enough, it is not found in any of the prearranged forms of kumite nor is it used in jiyu-kumite; consequently, this provides some insight to the aforementioned questions.


YOKO KEAGE—NOT FROM OKINAWA: Before we move on, let’s consider the original versions of the kata where yoko keage was not used; rather yoko geri (which in Okinawa was, and in many cases `still is’—`a front snap kick to the side’). Ultimately, one needs to understand “Why did Funakoshi Gichin Sensei and, his son Funakoshi Yoshitaka (Gigo) Sensei introduce the yoko keage?”


THREE QUESTIONS—RELATING BACK TO FUNAKOSHI SENSEI: I will first need to move away from Yoko keage in order to provide a sound background to answer the above questions. To do this, I will first need to address three generic questions, please bear with me:  (1) Conspiracy theory? Did Funakoshi Sensei intentionally mislead those he was teaching in Tokyo (For example, instruct useless techniques to the occupying US Military and perhaps even the mainland Japanese themselves?). (2)  Was it a means of turning karate into a form of pre and post WW2 physical education—and nullifying karate as martial art/effective form of hand-to-hand combat? And (3) Did Funakoshi Sensei wish to turn karate into gymnastics based sport?


The answer to all three of these questions is of course “No”.


First, let’s consider the idea of Funakoshi Sensei being deceitful: Funakoshi Sensei did not teach a form of karate to mislead anyone. This would completely go against his unpretentious character, which has been historically well-documented; furthermore, the accounts of his honest personality (that numerous direct students and his family members have given) would never be consistent with such deceit. In addition to these points, one must not forget that Karate was his ‘life’s work’… Clearly, it would not make any sense—whatsoever—for Funakoshi Sensei to pass on his life’s work merely `to mislead people’.  The fact is that he was an educated man and was ‘seeking to improve the techniques of karate for self-defence for wider society’, which we will look at later. Taken as a whole, the idea of conspiracy theory, of him teaching technique incorrectly, so his friends back on Okinawa would one day ‘wipe out the occupational forces with their bare hands and feet’; and/or ‘win back Okinawa as island independent of mainland Japan’ is utterly preposterous
Secondly, let’s consider if Funakoshi Sensei was trying to turn karate merely into a form of pre and post-war P.E (Physical Education): Needless to say, the first half of the 20th Century was filled with horrific military conflicts, which, while consistent with humanities brutal history, in turn led to conflict on an unprecedented global scale and the arise of mechanised warfare: WW1 and WW2. Based on this socio-historical context, strengthening the youth of Japan—both physically and mentally—was clearly an objective (before WW2 during their waves of military engagement, and certainly after their massive defeat). In this regard, it is also irrefutable that Funakoshi Sensei primarily saw karate as a way to develop positive psychological attributes in his students such has reigi (etiquette) and so forth. This can be seen in all of his writing and is most famously depicted in the Dojo-Kun and his 21 Precepts of Karate-Do. Nevertheless, he continued “to ardently emphasise the simultaneous development of the `hands and feet into swords’”. Accordingly, this offers undeniable evidence that “…he had no intention of reducing the effectiveness of karate as a martial art”. Unambiguously, Funakoshi Sensei who trained as an educator, believed that ‘increased physicality through karate training (in a modern `physical education context’) would contribute to an even more devastating karate’; subsequently, this was his physical gift to the Japanese Budo/Martial Arts World. And not independently, but parallel to this, he began to further emphasise the need for his students to develop good character, which was his gift to wider Japanese society (and perfectly consistent with other forms of `Do’). In sum, it is certain that a man like Funakoshi Gichin Sensei would never nullify his beloved karate as a martial art; rather, he improved it on all levels, which included aspects of modern physical education that contributed to an even more effective Budo Karate.
Thirdly, and finally, is the question of whether Funakoshi Sensei turn karate into gymnastics based sport? I will answer this concisely… It is absolutely clear that Funakoshi Sensei was against karate becoming any form of sport. His idea, right up until his death in 1957 was that karate is for self-defence only and that any such competition would be too dangerous (again, this shows that the karate he was teaching was very dangerous). Furthermore, the Jiyu Kumite in the universities apparently resulted in “…blood baths with teeth floating around”. Unfortunately, Funakoshi Sensei did not live to see the First JKA All-Japan Championship, which occurred just after he passed away. This tournament maintained karate as pure Budo (in-line with the key principle of ichigeki-hissatsu), and continues to do so, without deteriorating karate into a sport (or `game’ of arbitrary scores and the accumulation of points—with the solely aim of being ‘the winner’).
Back to YOKO GERI KEAGE…

So what does this all mean in relation to Funakoshi Gichin Sensei's adding of Yoko keage? Why did he replace the old yoko-geri, which was essentially a front snap kick to the side? The answer is that Funakoshi Sensei found that yoko keage was superior to the old method in several ways.


Firstly, he found that using sokuto (the knife edge of the foot) was easier to apply in self-defence, via his decades of experience.


Secondly, he established that when kicking to yoko keage’s ‘main target’ (the opponents testicles), the sokuto formation was more like to hit as it required far less precision in the blur of self-defence.


Thirdly, he found that the trajectory and path of the original technique was slower due to the hip shift required. In contrast, his yoko keage was immediate.


Fourthly, he ascertained that the yoko keage was useful for developing `kicking snap’ for all of the other keriwaza. It is also worth mentioning here that Nakayama Masatoshi Sensei expanded on this by emphasising kicking `from the core’ in various ways (which, again, pointed to the genius of Funakoshi Sensei—physical education-wise—in a time when sports science was essentially/comparatively still in the dark ages).


·         Another worthy note is how the yoko keage `in the kata’ are always executed with a simultaneous uraken yokomawashi uchi (with the exception of Bassai Sho, which employs haito uchimawashi uchi). Originally, in the case of the uraken (back fist), the kentsui or tettsui (hammer fist) was employed. While the kentsui works equally well, the uraken is easier to use in a scuffle (again, requiring `less precision’ or less `fine motor skills’ to apply).


Conclusion: Funakoshi Gichin Sensei was a karate genius, both a great teacher and innovator. By analysing the many improvements he made to Okinawan Karate, we can vividly see this. Yoko geri keage is a great example of his pedagogical talent (and likewise, the coordinated use of the uraken).  Yoko keage is a short, sharp, and close range weapon - with the foot - that requires no change of position to execute (against an attacker from the side); unlike its Okinawan predecessor it doesn’t require fine motor skills to `apply’; yet, it is more challenging to practice. As an Education Major, I can fully relate to Funakoshi Sensei in  this regard: http://www.canterbury.ac.nz/future-students/student-profiles/profiles/andre-bertel.html). Yoko geri keage also helps to develop other leg techniques through the development of different muscles, increased snap, and a variation of movement—a `side-up kicking form'; and overall, it reveals the power of junansei (softness). Osu, André. 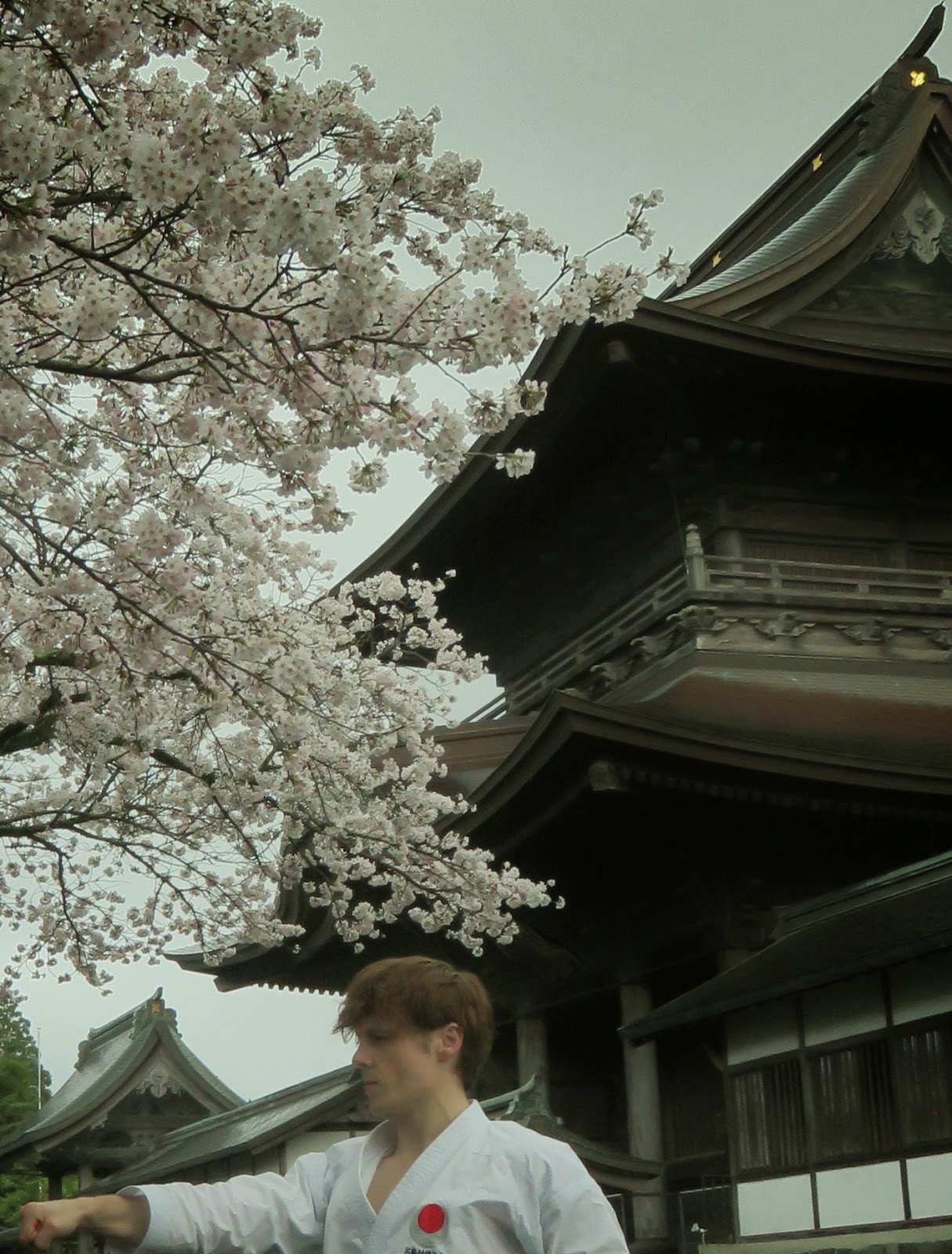